It was with great sadness that the Committee and I felt obliged to cancel the Spring Carvery Lunch on Sunday 5 April. As you know however the situation has taken a turn for the worse since then and so I suppose that it will come as no surprise to you that we are having to cancel our summer programme.

This would have been an outing to Samlesbury Hall on 20 May, the garden party on 16 June and the AGM on 26 June. It is likely that we will postpone the AGM as, under the constitution, the Club is required to have one, but we will look separately at the implications for the Club in this matter.

I do hope that you are all coping well at this time of great stress to yourselves and your family and friends. If there is anything that you feel Committee members might be able to help you with please contact me or our Secretary, Gillian Roche. Most of us may be self-isolating but we are on the end of a phone.

The  Autumn programme below had to be cancelled. Hopefully they may happen at a later date.

Best wishes to you all.

Please send any comments before 11th September, the date of our virtual AGM

Whilst these are primarily for information only, under the terms of our constitution, you are asked to approve the new Committee members, Mrs Candace Arber and Mrs Jean Williams. Ms Christine Roy and Mrs Gillie Andrews are resigning from the Committee: Mrs Andrews will be replaced as Minutes Secretary by Dr Diana Wetherill and Ms Roy will be replaced as Treasurer by Mrs Angela Robinson.

I have just been looking at the ULLC Website, and as usual I am very impressed by the way our club member Mrs Joanne Fox manages to keep it up to date, and remind us of all the good times we have had, and hopefully will have again in the future. It is interesting to read the History of the Club, which is now in its 95th year, be reminded of past events, and see people who are no longer with us, but have been such a great asset to the club in the past.

We remember particularly the people who have died during the year: in August, University Life Fellow Ralph Williams, husband of past club Secretary Mrs Jean Williams; in September Dr. Peter Beeley, husband of long standing member Mrs Jean Beeley; in October Mrs Freda Hullin a member for over 50 years, and a former Secretary, President and Honorary member; in January Mrs Mabel Dowson's husband Professor Duncan Dowson, and also in January, Mrs Mary Forster, a member for over 50 years, a former President and Secretary and an Honorary member. Our membership continues to be stable with 102 members (including our Honorary members and one life member), with four new members joining in the course of the year.

We began the Autumn Term as usual with the Harvest Lunch on Tuesday 24th September at University House where we enjoyed good food and good company. On 10th October we had an interesting talk by Mr Robert Gee on “The work of The Citizens Advice Service in Leeds Today”. On Thursday 14th November we welcomed Mr John Hafseth who, with his wife Connie, lived in the Saudi Kingdom from the early 1970's until 2005. He gave us a talk about his early life in the kingdom, and then contrasted it with the changes that took place under the different regimes, with particular emphasis on the lifestyle of women. 12th December was the date of the Christmas Coffee Morning in Devonshire Hall, and as usual we raised money for the Lord Mayor's Charity by baking cakes, buying cakes, bringing books, bric-a-brac, supporting the raffle etc. and having a good time.

We began 2020 on 22nd January with a visit to the Civic Hall, to present the Lord Mayor, Councillor Eileen Taylor, with a cheque for the money we had raised for the her Charity, Leeds SARSVL. On this occasion, we had the opportunity to talk to the Mayor, and enjoy delicious refreshments. As Councillor Taylor is going to be Mayor again this year, I am hoping that we will have the opportunity of meeting her again. It was particularly poignant to see the pictures on the website of the ULLC members in the Round Theatre of The Union Building, during the visit to the University on the 13th February this year, which everyone really enjoyed. During our visit, we were taken on a tour of the Union Building, followed by interesting and informative talks given by Lauren Huxley, Union Affairs Officer, and Mr Steve Gilley, Director of Estates who has led the development of 20 new buildings in the University. On Thursday 5th March Veronica Bird OBE, a former Prison Governor, who has written a book about her life, gave a very interesting insight into Prison Life, and you can also see a picture of her on the website.

On Sunday 5th April, the Spring Carvery Lunch was scheduled to be held at University House, but unfortunately had to be cancelled, for the same reason as our scheduled Summer Programme. We had organised a programme of events for the Autumn Term 2020 but unfortunately we can no longer go ahead with this due to the present crisis. We are hoping to organise a programme of events in 2021 and we will let you know when and if this is possible. Please consult the website for the latest developments (www.universityofleedsladies'club.co.uk).

I hope and pray that the University will be able to go ahead with its development plans, cope with the many difficult problems that lie ahead, and remain the excellent Centre of Learning it has always been. I would like to take this opportunity to thank you all for your help and support during this year, and I look forward to your continued support next year.

Best wishes to you all.

Little did we know, when we reconvened in September 2019, that our programme would be rudely curtailed by a global pandemic, occasioned by the Coronavirus outbreak, resulting in the suspension of all our activity as the country went into lockdown in March 2020 and we were asked to Stay Home: Protect the NHS: Save Lives.

And so, on 24 September 2019, 39 members met up at University House for our customary Harvest Lunch of sandwiches and cakes, the latter provided as always by Committee members. This was followed by two most interesting talks in October and November at Devonshire Hall, the first on the work of the Leeds Citizens Advice Bureau by Robert Gee and the later one “A personal view of the Saudi Kingdom” by John Hafseth with attendances of 32 and 43 members and guests respectively.

The Christmas Coffee Morning on 12 December was a great success, enjoyed by 43 members. All our stalls increased takings over the same event in 2018, which enabled us to donate generously to the Lord Mayor’s charity in January. This was due partly to better weather and also to the fact that members responded well to pleas for more donations of goods.

It was our turn this year to invite ourselves to the Civic Hall for tea with the Lord Mayor, Cllr Eileen Taylor, on 22 January 2020. Twenty seven members enjoyed the occasion and we were able to present her with a cheque for £250 for her chosen charity, Support after Rape and Sexual Violence, Leeds.

Our ‘departmental’ visit this year was a slight alteration to our usual event: on 13 February we had a guided tour of the University Union, which has undergone major refurbishment over the past few years, and then had a talk from Steve Gilley, the University’s Director of Estates which brought us up to date on estate developments both on and off campus. The event was enlivened by the presence of our young Japanese member, Tomo Kato, and her new baby Haruta. Our last event before ‘lockdown’ was a fascinating talk by Veronica Bird on her life in the prison service on 5 March attended by 36 members and guests.

By mid-March, when we were finalising arrangements for the Spring Carvery Lunch on 5 April, it was obvious that we would need to cancel it, which we did on 16 March. And, because of the severity of the outbreak, we were obliged to cancel the rest of the Summer programme (although the AGM may be held virtually during the next two months). In April and May three members of the Committee – Mrs Wallace, Mrs Bradbury and Mrs Roche – were able to make telephone contact with all our members to check on their welfare, which was much appreciated.

I would like to put on record my thanks to our President, Mrs Moira Wallace, and the Committee, without whose input my work would have been much harder and less enjoyable. It would be remiss of me also not to thank the staff of University House and Devonshire Hall for their unfailing helpfulness and kindness.

I only hope that we can soon see some light at the end of the tunnel so that we can start our 96th year without too much delay and without the loss of too many more lives either in UK or globally.

The funds remain at a very healthy working level for a social club. The current level of subsidy for events such as the summer outing, the Garden Party and the AGM remains manageable.

In view of the truncated programme this year and the likelihood of not being able to resume our usual activities for a few months yet, I would suggest that there is no need for members to pay a membership fee for the year 2020/21. 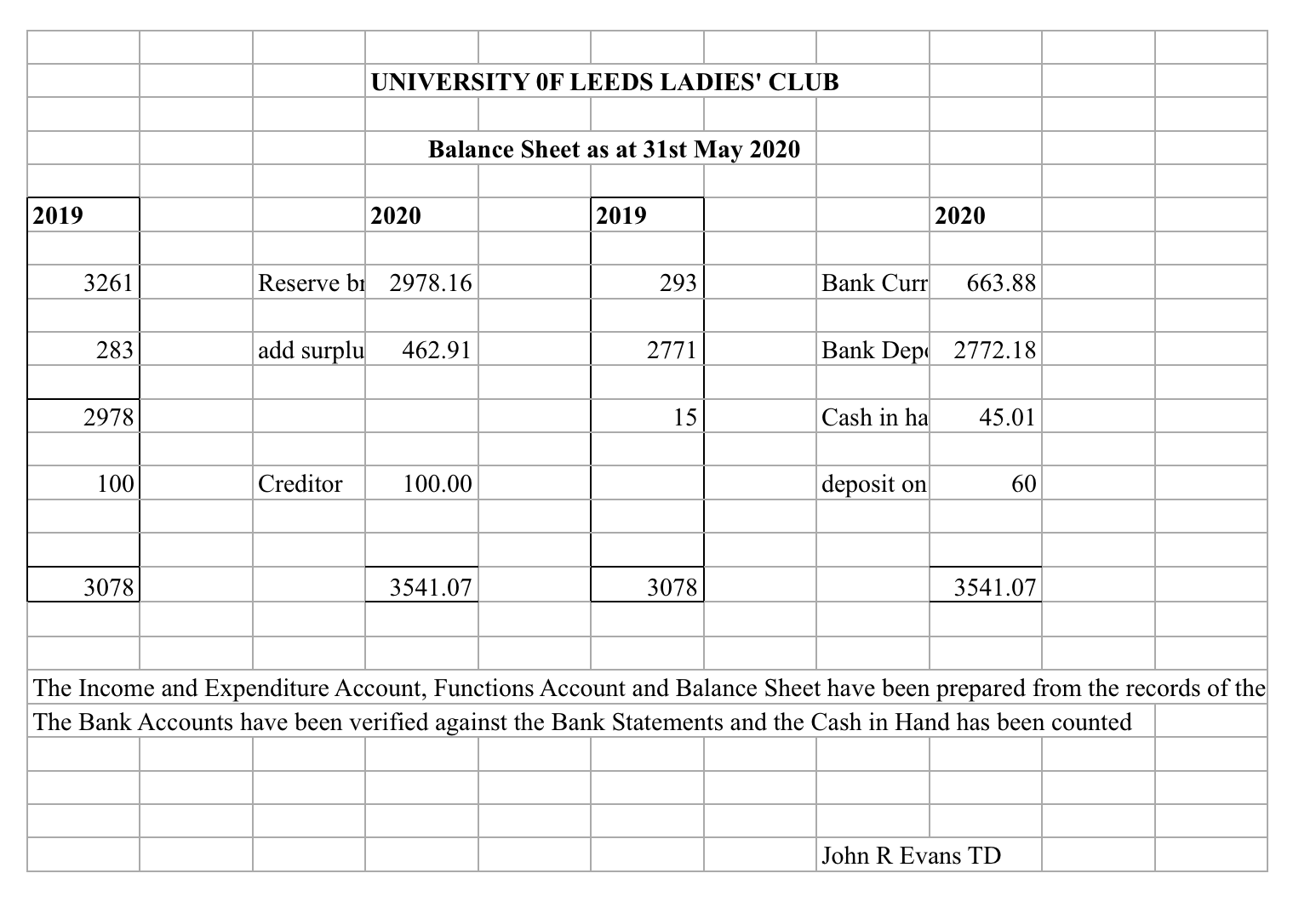 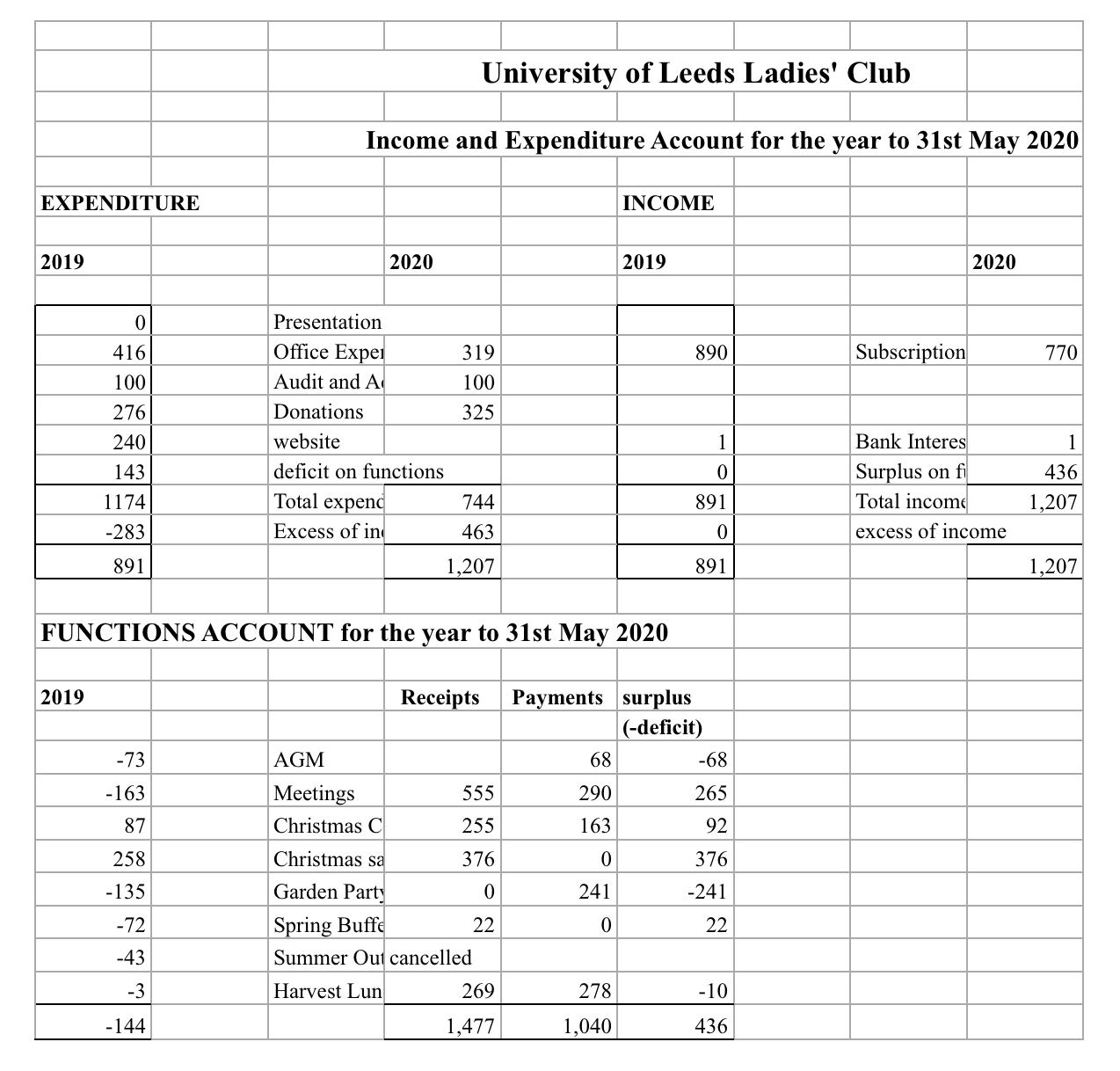